The articles featured in this section of Ambiente’s website are written by our managing director Suzanne Watkinson and describe properties, predominantly residential, here in Macau.

For readers contemplating a move to Macau we hope that this offers a useful insight into the kind of homes they could expect to find.

It has to be said that a home is what you make of it.  Many of those included are rented, not owned.  Readers should be aware that in most cases rental properties are usually passed to their new tenants as a blank canvas, with little character, charm or ‘soul’.  It is the creativity and caring of those living in them that has made them what they are.

Suzanne is a regular contributor to the monthly magazine Macau Closer, where these articles are published. Living in Macau for almost 27 years Julia Herold has moved home several times, coming full circle when she returned to Ocean Gardens. This is Ambiente’s Suzanne Watkinson’s latest article for her Home Affairs section in the Macau Closer magazine, featuring interesting properties and people in Macau. Architect Kong Wai Keong and his partners have recently joined the bustling community of restaurants and coffee bars in Macau’s NAPE area with the opening of their charming eatery, The Three. Danilo Lemos Afonso-Henriques shares his home, heritage and a wonderful artwork collection.
Timor-Leste Delegate at the Forum for Commercial and Economic Cooperation between China and Portuguese Speaking Countries (Macau) Danilo has lived in Macau since 2014. Creative event designer, entertainment and film specialist Brett Ingram has given a facelift to his new home in Macau Originally from Brisbane, Australia, serendipity played a big part in Brett Ingram’s arrival in Macau in April 2007. Having grown up in the cinema industry in Australia, he moved from film after 14 years into ticketing, […] Living by the Sea

A hidden jewel in Coloane has been home to Manuela Ribeiro for the past 15 years.  She shares with us the treasures collected from her travels. Born in Lisbon, Portugal, Manuela Ribeiro spent her early 20’s in Mozambique.  Although “I feel African in my heart and soul”, after a few years she started looking beyond […] A 4-bedroom duplex apartment in Pearl on the Lough is home to Bruno Simões and Gemma Puig and their family. For the past year it has been home to Bruno, Gemma and their children; Bruno’s teenage daughter Laura who was with them for her last year of high school before leaving for Portugal and Gemma’s […] Our own piece of Macau Heritage

Naoko Simms and husband Eric have lived in many different places around the world but have settled on Macau as their forever home. A three-bedroom apartment in Hellene Garden has been given a make-over.  New owner Antonio U shares his design ideas and his enthusiasm for the good life. An entrepreneurial couple with a first-of-its-kind, urban farm business in Macau chooses Oscar Crescent for the family home. 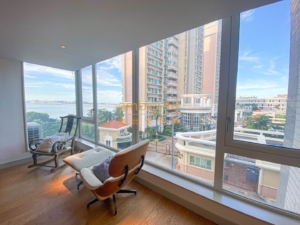